I recently joined a bookclub. I know the shocker for most of you is not that I am in a book club, but that it has taken me this long to join one! What can I say, it’s tough to find kindred spirits in the overlarge metropolitan area in which I live. I’m not so damn sure these ladies are exactly kindred spirits yet, but I’m willing to give it a whirl and see how it goes. This is an exclusive invite-only club and I was invited by one of the members, but not the designated leader of the group and that caused much trouble at my first meeting. Additionally, the thing I feared most: my taking the whole literary reading too seriously – did in fact, prove to be problem. For my first meeting, we read Let The Great World Spin

by Colum McCann. The book was a quick read and at points gut-wrenching without any overwhelming mention of 9/11. The NYT review is fairly accurate although I personally did not like the book as much as the reviewer seemed to. And that is where my problem at book club started. I came prepared. I read the text. I also (through prior interest) had seen the documentary on which large chunks of the text were based and even own the children’s book written from the original news story about the man who tight-rope walked between the two towers shortly after the buildings were constructed. I had notes and concerns about how/why the author had changed some of the background story of the original in his novel. Even more, I was able to write the author my questions and receive an answer from him regarding those changes in an author discussion prior to book club meeting.

Only some of the other women even read the book.
I looked like a snobbish asshole.
I am a book snob, no doubt about it. So the other book choices don’t seem to mesh with my kind of reading.
I might’ve picked up this book as quickie-beach-reading material, but would not have chosen it for intellectual exercise. Water for Elephants is our March selection

And at least I was forewarned by the coordinator (who deemed my persnickety snobbery as a refreshing change in her book club and has agreed to let me in) that the conclusion would end up being a foolish LifeTime-Movie-of-the-Week ending. She was right, it is. Worse, is that I’ve read and enjoyed the disturbing Geek Love 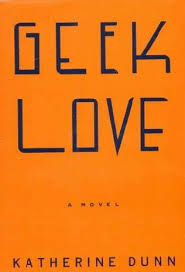 from which this tale seems to skirt much of it’s plot. And Geek Love was a better book, with no ridiculous fairy-tale ending.
Beach Music is our April

reading and I haven’t brought myself to crack open the spine on this one yet because I decided to rampage through Atlas Shrugged, which is for December (because it’s long?)

.
And here is where I am so frustrated!
I am almost finished reading the book, which has been a major task for me. I’ve picked up several editions of the text over the years and have before never been able to get through it. The writing is outrageously romance-novel ilk and the context is sickening, given our current state of economic affairs. I have gotten through Fountainhead

and we keep a copy in our library for the kids’ required reading lists as they go through school. I am not an Ayn Rand fan. Furthermore, the copy of Atlas Shrugged that I picked up is the 50th anniversary edition and included in the middle a tear-out membership form to join the Ayn Rand Institute. Hawking such shill in a “literary” project makes me want to barf even more than the pages-on-pages of “inner dialogue” that is devoted to the protagonist. With sentences like, “His face was not as it was in the sunlight of the moment when she had seen him for the first time: a face of merciless serenity and unflinching perceptiveness, without pain or fear of guilt” it’s pretty hard for me to not doze off in a stupor. In fact, the hubby has been amazed at my perseverance in reading the book because everytime I pick it up, I fall asleep faster than you could say “sleeping pill.” But I am sticking to my book club commitment and reading every single word, every single page.
And the text has left me immensely disturbed. Right about the time I got through the glowing introduction, I saw a PBS special on Alan Greenspan (you know the former Chair of the Federal Reserve – who also happened to oversee interest-rates, government monetary/financial policy, and act as responsible agency to oversee risk in financial institutions). That documentary was about Alan Greenspan’s adoration of Ayn Rand and her political/financial ideology as originally outlined in… ta-dah…. you guessed it: Atlas Shrugged. So reading this book at this moment in history is like reading Alice in Wonderland after waking from a nightmare where the Queen of Hearts is really commanding, “off with your head!” Only our collective financial nightmare is very real. The back-copy on the book touts Ayn Rand’s Objectivism philosophy as being a spectacular success. And who could argue? Greenspan proudly invited Ayn Rand to his swearing in ceremony as his only guest. Rand’s way of thinking has been so important to the financial and political process in that Greenspan enacted her theories as actual policy in the United States governance of it’s financial institutions which we all know impacts international finance as well. If that doesn’t scare the bejeezuz out of you right now, then maybe after you’ve lost your gainful employment and credit rating, you’ll be considering more closely, The Virtue of Selfishness, that undergirds Rand’s political notions as well as the plot to the story in Atlas Shrugged.
When I am reading, I am smacked by the pervasive superiority that the protagonist and her friends express toward the other characters in the novel. In placing the text in the context of it’s era, 1954 and anti-communism frets, it makes sense that Rand’s very anti-communist/socialist ideas would be well-received. This is commie-bating at it’s finest to be sure. The main conflict of the plot revolves around the main protagonist Ms. Dagny Taggart railroadess extraordinaire in direct opposition to her brother and his gang of regulating-political wonks who are all over-described as being sloth-like and stupid. For years, men I know have been hounding at me to see Ms. Taggart as a positive feminist role-model, despite the anti-commie sentiment. I have never seen her as such. Even more so, now that I am older, I find Dagny Taggart’s brand of feminism as a disgusting exemplar of woman-behaving-like-men-to-get-ahead phenomenon. And it, furthermore, seems ridiculous to ascribe feminism to a woman, who sleeps with the captains of industry to get what she wants as she does in seeking metal for her trains and rails. Yet, I’m willing to let that slight against feminism go as a misunderstanding by the men I know of feminist ideals regarding equality.
What really disturbs me is that in reading this book, at this moment in time, when the financial markets around the world are crashing and gaining some momentum and then crashing again, is that much of the ideology of this book has been an important part of our political landscape in my lifetime. The arrogance of Dagny Taggart and her buddies as being superior to people who want to regulate industry and banks is alarming to read in the fallout of Alan Greenspan’s admissions before Congress that his failing to regulate industry and banking is the mistake he made in his supervision of the Federal Reserve. And worst for me, is that most Americans are not equipped with economic and historical education to understand how dangerous this has all been or how difficult it is going to be to get us out of the trouble we are in. And I’m not a huge fan of regulating an issue to death. However, I do think there has to be some sanity and forethought in regulating markets. Leaving the market to monitor itself – with people who believe themselves to be superior to the “uneducated masses” is leaving an ugly stain on the American legacy – not to mention the financial stability of everyone.
I believe in democracy. I believe in an educated proletariat. As a people, Americans are a long ways away from resembling anything like the best of what we can be. We have to re-build our country. We have to regulate, educate and finance the masses. We must strike a balance between collective need (that are exponentially growing everyday of this financial crisis) by changing the primacy our individual egoism. I think my neighborhood filled with foreclosed houses, my kids schools lacking funding for next year, the budget shortfalls in the several American states might just be evidence enough that Ayn Rand was wrong. Destructiveness of altruism is not the nature of a proper government.
Come December, this book club may decide to kick me out for my radical views on the texts. Right now, only time will tell.