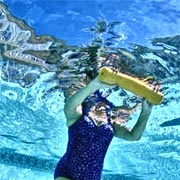 Many of you will not know of my love affair with aerobics. In P.E. class I was a queen of the Jane Fonda movement that swept through my high school. I loved to run, but I mostly did that to get out pent-up anger . Since I cannot run anymore, I love the workout in the water. And despite all the old people, I really do get a great work-out. My workouts have been so fun, and I guess entertaining to watch so that my elderly classmates nominated me to take over the Tuesday lessons.

But this did not occur without sone controversy. An old pervert in my class set to getting my attention the first day I began attending classes. The guy seemed kinda like a doddering old fool to me so I really didn’t give him much thought at first. But he kept being sorta demanding of my attention. When my classmates noticed his attentions I began to worry. When he got grabby and tried to touch me every single time I saw him, I got mad. When the grabby got out of control I was faced with a dilemma. Were this a young man, I woulda made a big scene hitting him every time he tried get an unwelcomed feel, but this is not a young man. He is old. Like 80 years old. And this creeped me out more than I can say.

Given my history of domestic violence and childhood sexual abuse, I began to wonder, “do I just look like a victim?” the answer of course, is, “no.” But I did grapple a few days about whether or not I had an invisible “V” stamped somewhere on my person that seemed to welcome crazy into my life. And then it occurred to me that the only way in which I was acting like a victim to this guy was by not calling him out as I would a younger man. I didn’t have to break his arm, but I certainly didn’t have to tolerate his behavior either.

My first tactic was to enlist the aid of other people in the class who witnessed his shenanigans. Then I spoke clearly and definitively to the guy, telling him I did not like his attentions toward me. Of course he acted all surprised, but I didn’t let him off the hook and neither did my new-found support. Then I spoke with the director of the program to help me keep an eye on this guy so that when I am there I can focus on working out and not trying to maneuver away from the creep.

The funny thing is that after I revealed my troubles to the aquatics director, he confirmed my concerns by revealing that this guy had a history. The problem at the facility-management level was that no one had actually made a complaint about this guy. He had been harassing lots of women over the years precisely because no one had spoken up about his behavior. The staff was stumped about addressing what they saw as harassing behavior, but could not confront this guy without any specific complaints.

When I spoke up, the dynamic of the class dramatically changed. My classmates tell me it’s for the better. There is a new sense of security in the class among the women who know that if they speak up something will be done about their concerns. This guy still comes to class occasionally, but he now knows that he must behave appropriately if he wants to stay. And I think I was nominated to instructed the Tuesday lessons because my classmates saw me as a leader who cared about myself and the people of my class.

I suppose if I had not spoken up, nothing would’ve changed and I would have lost this really great community of older folks who care about me.