Things were not lookin’ too pretty this year as far as relationships go.  In fact, I have to say that it was probably one of the worst years of our coupleship.  Every year we get into a big nasty brouhaha over, what is supposed to be, our celebratory dinner.  Usually the nature of the conversation is centered around our goals and feelings about being married – to one another.  That’s the spark… and then, all hell breaks loose.  We have ended nearly every one of our 11 married years’ anniversary dinners in a hostile snit.  This year – having regrouped following our shortlivedandfailed separation, and the trauma of my lackingcareerguidance, oh and the postcancerrecovering – let’s just say, we had a lot to bicker about.

Dinner was cozy and delish, gifts were blinging, and we enjoyed the company of the other – even when the topics veered into dangerously emotional territory, it was all good.  And the BigShot apologized for all the miserable anniversaries of years’ past when it was a small wonder we decided to stay together. 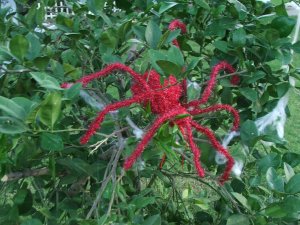 When I wasn’t basking in the glow of positiverelationing, I spent the rest of the coolinglovelyfallweather weekend decorating la maison for our FAVORITE holiday: Hallow’s Eve!  (yes, that’s my luscious garden full o’ veggies in the background!)

What could I do, but enjoy the love…?!